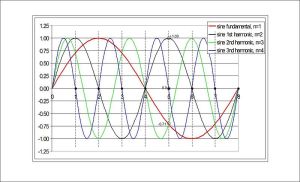 Simply put: Harmonics are unwanted frequency components and unbalance in terms of uneven power distribution between the phases in the electrical network.

More exactly: Harmonics are disturbances to the sinusoidal voltage waveform. They are multiples of the supply frequency, in other words if the supply frequency is 50 Hz the fifth harmonic would be 250 Hz. These variations from the pure sine form are caused by non-linear loads from electrical machinery and appliances. These non-linear loads can be caused by anything from battery chargers to variable speed drives or flourescent lighting. High levels of harmonics can cause power quality problems and voltage distortions.

Harmonics and the power quality problems they cause can have expensive and often detrimental effects on machinery and appliances. Flourescent lighting may need to be changed continuously, electric motors may have a higher frequency of break downs and a shortened life span. Some common direct impacts of poor power quality in the shape of harmonics are:

The fact is that harmonics have become a problem for many business sectors and the costs are consistently rising. The number of disturbances are increasing and modern production equipment is becoming more sensitive to these disturbances.

Harmonics caused by large machine parks can also have an effect the grid. This is why there has been an increase in regulations and standards required by municipals. Some examples of standards governing harmonics emissions are IEEE 519, G5/4, EN 61000, EN 50160, D-A-CH-CZ, among others. Some standards are also specific to certain applications, such as DNV or ABS for offshore applications. The standards most commonly require a voltage harmonic distortion below 5-8%.