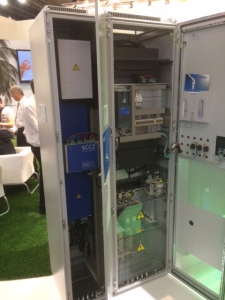 The Low Harmonic NXC was recently shown at a large exhibition in Sweden and is reportedly offered on a project by project basis but will become a standard offering in the near future. The system shown, verifies the smaller foot print and weight of the Active Filter drive system compared to the more common Active Front End drives. The active filter NXC also has a lower power loss, which is becoming more important as the EN 50598-2 standard is introduced.